What is at the heart of our spiritual beliefs?

The term “New Atheists” was coined back in 2006 by the journalist Gary Wolf, as he was describing the positions promoted by some of the most outspoken and popular atheists of the twenty-first century. They all viewed religion as nothing more than superstition. The four most prominent people in this group were Sam Harris, Richard Dawkins, Christopher Hitchens (now deceased), and Daniel Dennett. They have been referred to as “The Four Horsemen” of atheism.

One of “The Four Horsemen,” Sam Harris, a best-selling author, penned some words recognizing that atheism and Christianity compete on the same playing field. He remarked:

“So let us be honest with ourselves; in the fullness of time, one side is going to really win this argument, and the other side is really going to lose.”

Acclaimed literary critic Adam Kirsch adds another truth I believe we can all agree on:

“The best atheists agree with the best defenders of faith [in God] on one crucial point: that the choice to believe or disbelieve is existentially the most important choice of all. It shapes one’s whole understanding of human life and purpose, because it is a choice that each must make for him or herself.”

I would like to share with you below one of the fifty-seven short essays found in my newest book Reflections on the Existence of God.

Back in 2004, I entered an essay into the John Templeton Foundation Power of Purpose essay contest. Since there were several thousand contestants, it was no surprise that my essay did not place or win an award. However, I did have the opportunity to read the winning essay by August Turak. It was a story of how a powerful encounter with a Trappist monk changed his life. One of the stories he tells reveals a great deal about what is at the heart of spiritual belief.

Turak describes a spiritual retreat he attended at an isolated monastery. He spent a great deal of time in solitude, but spent some time talking with someone whom they called a “spiritual director.” His spiritual director was a man they knew as “Father Christian,” who was 88 years old, spoke several languages, and had three PhDs.

“One afternoon in a one-on-one meeting with Father Christian, they got into a discussion on faith and belief. Father Christian launched into a story about a Presbyterian minister having a crisis of faith and leaving the ministry. The man was a friend of his, and Christian took his crisis so seriously that he actually left the monastery and traveled to his house in order to do what he could. The two men spent countless hours in fruitless theological debate. Finally dropping his voice, Christian looked the man steadily in the face and said, ‘Bob, is everything in your life all right?’ The minister said everything was fine. But the minister’s wife called Christian a few days later. She had overheard Christian’s question and her husband’s answer, and she told Father Christian that the minister was having an affair and was leaving her as well as his ministry.

Christian fairly spat with disgust. He was wasting his time. Bob’s problem was that he couldn’t take the contradiction between his preaching and his living. So, God gets the boot. Remember this: All philosophical problems are, at the heart, moral problems. It all comes down to how you intend to live your life.”

One of the great philosophical thinkers of the 20th century was Mortimer Adler. He taught philosophy at the University of Chicago. He also helped found the Aspen Institute. Adler was co-editor of the 55-volume series entitled The Great Books of the Western World and was the sole author of 52 additional books.

For most of his life, he was a self-described pagan. Then, to the shock of his colleagues, he became a Christian at the age of 82. Adler lived to be 98 years old, and as he reflected back on his life, he acknowledged that at times he had been intrigued by the Christian faith. Even so, he never took the leap. As he examined his heart, Adler realized that he ultimately did not want to change his lifestyle. He did not want to live the Christian life; instead, he wanted to be free to live the way that he wanted. He said, “The decision to become a Christian lies in the state of one’s heart (will), not in the state of one’s mind.” It dawned on Adler late in life that his atheism was not intellectually driven; it came down to how he wanted to live his life.

When it gets right down to it, so many people are not on a truth and wisdom quest but rather on a search for pleasure and happiness. It comes very naturally to be guided by our feelings and emotions and not by reason and the yearning to live in harmony with what is true. In other words, our quest for pleasure and happiness takes priority over reason and sound decision-making that leads to our personal well-being.

I remember how shocked I was several years ago when I read where the well-known atheist Aldous Huxley gave his reason for being an atheist. In his book Ends and Means, he says:

Think about what he is saying. This is a very intelligent man who says he does not believe in evolution because of the evidence. In fact, he is acknowledging there is not that much evidence for believing it. He did not want sexual restrictions, which God imposes upon us. For this reason, Huxley was drawn to atheism, in large part because it provided sexual liberation.

The great St. Augustine even acknowledged that he resisted God for a long period of time because of his desire for sexual pleasure. In his autobiography, he admits that intellectual arguments he made against believing in God was a smokescreen. He states very honestly, “The plain fact was, I thought I should be impossibly miserable without the embraces of a mistress.”

Modern people resist God because so much is at stake. We come up with all types of reasons not to believe in God, but cannot admit that our real problem is not a matter of the intellect but a matter of the heart and the will.

Dr. Scott Peck shares a true story that powerfully demonstrates the resistance of the heart. It is the story of one of his patients, Charlene. She struggled with depression and experienced a sense of meaninglessness in her life. As Peck asked questions and probed, he learned that she had apparently grown up in the church and had a belief in God. Peck described her as having a “well-developed, religious worldview.” He asked why her beliefs did not make a difference in her life and help her with her sense of meaninglessness. There was a silence, and then she exploded with this incredible admission:

What an incredibly honest admission. This woman’s response is a picture of the human heart resisting God, refusing to surrender to God. And she gives the reason: “I want to live my life for me.”

This is the heart of the human condition. If God is real, and the Christian worldview is true, then it is only logical for us to live under His authority and adopt the Christian worldview. Yet so many resist the authority of God. They desire to be autonomous and to be a law unto themselves. They do not want to give up control of their lives. I have encountered many people who find it much easier to proclaim that God does not exist than to acknowledge His existence and intentionally choose to reject Him.

In the end, it is important to know whether God exists or whether He does not. There is no third option. This book lays out, in short essays, much of the evidence for the existence of God that is available. We should seek to take the evidence offered and use it to make reasonable conclusions. What you will find is, as the evidence accumulates, it enables us to come to confident conclusions about God. Who He is. And, that He truly is.

Get your copy of Richard’s newest book Reflections on the Existence of God on Amazon or at existenceofgodbook.com

Richard E. Simmons III is a Christian author, speaker, and the Executive Director of The Center for Executive Leadership, a non-profit, faith-based ministry in Birmingham, Alabama. His best-selling titles include The True Measure of a Man, The Power of a Humble Life, Wisdom: Life's Great Treasure, and his newest book, Reflections on the Existence of God. Follow Richard on Facebook, Instagram, and LinkedIn @thecenterbham. Tune in to Richard's Reliable Truth Podcast on your favorite podcast app. 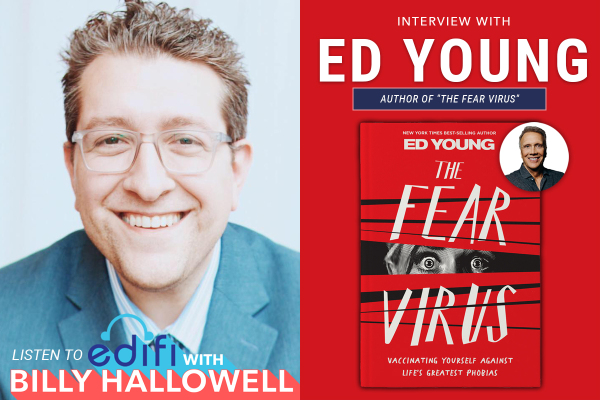 Ed Young, senior pastor of Fellowship Church, is on a mission to help people combat the “fear virus,” warning that many ...